Will 3D-printed houses stand up as architecture?

Janjaap Ruijssenaars' design can be printed from sand 'just by pressing enter'. But is this high-speed construction a welcome change? 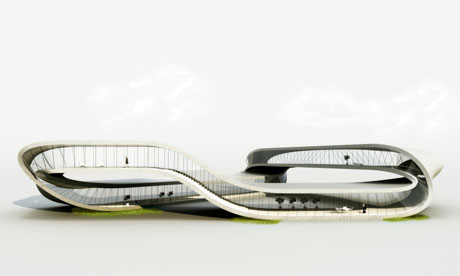 3D-printing may have been used for a long time in the world of architecture, allowing visionaries to conjure ever more elaborate and unbuildable forms from the ether. But the technology has never been used to build anything bigger than a prototype model.

This could all be set to change, now that Dutch architect Janjaap Ruijssenaars has unveiled designs for the world's first 3D-printed house. The Landscape House takes the form of a continuous looping Möbius strip, rising out of the ground before folding back on itself in a seamless undulating band. Its complex geometries are not made of reinforced cast concrete, however, but layers of printed sand.

Working with mathematician and artist Rinus Roelofs, Ruijssenaars plans to create the building in sections of up to 6x9m, printed using the D-Shape printer. Developed by Italian engineer Enrico Dini, the printer uses the same stereolithography principles as smaller printers, only scaled up, using sand fused together with a chemical binding agent. The sections will be printed as hollow shells, which will then be filled with fibre-reinforced concrete for extra strength. The entire house will take around 18 months to construct, at an estimated cost of €4-5m (£3.3-£4.2m).

"By simply pressing the 'enter' key on the keypad we intend to give the architect the possibility to make buildings directly," says Dini, "without intermediaries who can add interpretation and make mistakes in the realisation."

His vision is to cut out the expensive, cumbersome manual processes of conventional construction and give the designer absolute freedom.

"To build a complex concave-convex surface, for example, would require the prefabrication of expensive formworks and cages, the mounting of complicated scaffolding and then the manual casting," says Dini. He claims the D-Shape allows a level of precision unheard of in the past. "The human limitations of master builders and bricklayers will no longer hamper architects' visions."

The Landscape House follows an earlier project by Italian architect Andrea Morgante of Shiro Studio, who used the same printer to construct a 3m-high pavilion in 2009 – the largest ever 3D-printed object at the time.

But the question remains: is speeding up the process from concept design to built reality an entirely welcome change? In a world where scaleless computer-generated forms can be summoned so quickly from the inky black depths of the screen, free from context, what might "simply pressing 'enter'" lead to?